I have never been a superstitious person. After all, I am a doctor and have been trained to believe in science and evidence, to make a diagnosis and move forward with the best steps towards management—trained to take control. But it is true that as …

Dr. Marla Shapiro is a Certificant of the College of Family Physicians of Canada and a Specialist in Community Medicine. She is an Associate Professor in the Department of Family and Community Medicine at the University of Toronto and has her own family practice. The … 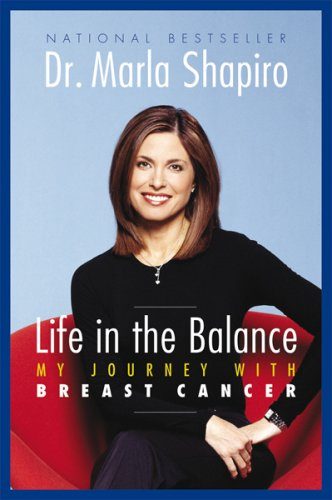 Admired for her intelligence and her many accomplishments, “Dr. Marla,” or “Canada’s Doctor,” as she is known, seemed to have it all. But on Friday, August 13, 2004, Shapiro found out she had an invasive form of breast cancer. Like the more than 20,000 Canadian women who are diagnosed every year with the disease, her world changed forever. But unlike most of those women, her status as a physician meant she had an insider’s knowledge of the disease and treatments.

Life in the Balance is Dr. Shapiro’s intimate, inspiring and often surprising account of her illness, from the shock of the initial diagnosis to multiple surgeries, chemotherapy and her agonizing decision to have both breasts removed, followed by reconstructive surgery and recovery. She candidly recounts her struggle going from the woman who routinely delivered all the seemingly right answers to her patients and her family, to the woman who quickly discovered that there were no right answers when it came to her own life-altering decisions.